Super draws of the Spanish lotto Lotería Nacional are held once a month. Such raffles are famous for the unusual game rules, a large number of guaranteed Jackpots which are distributed in a single draw, as well as perfect winning odds. 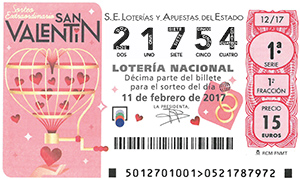 (Tickets can be purchased online via LottoAgent)  On February 11 lottery fans from different countries will be able to take part in the super draw dedicated to Valentine’s Day, the holiday when lovers send cards with confessions to each other. San Valentin is a lottery with the best winning odds in the world! The Lottery Operator SELAE claims that lottery participants will be satisfied with the results of San Valentin this year:

Residents of different countries can purchase the tickets of San Valentin here. The number of tickets is limited. Extraordinario de San Valentin has the same unusual game rules, as other annual super lotteries of Loteria Nacional. The player doesn’t pick numbers in the ticket he acquires himself — he purchases the ticket with a pre-printed five-digit number from 00000 to 99999 on it.

These numbers repeat several times in a single draw. For example, San Valentin has 10 series of the same numbers from 00000 to 99999. It means that the Jackpot or any other secondary prize can be scooped by 10 participants at once. By the way, there can be even more winners in each prize tier. The thing is every ticket is divided into 10 equal parts (“tenths” or “decimos”). The player can buy either the whole ticket or just one or several tenths.


(Tickets can be purchased online via LottoAgent) Loteria del Nino is the second most popular lottery in Spain which takes place once a year on January 6. This is a very old lottery dated back to the XIX century. Loteria del Nino was first organized as a charity game to sponsor children’s hospitals in Madrid.

The Loteria del Nino raffle date coincides with the holiday of Magi-Kings. They say, the Magi brought gifts to the new-born Jesus that day. The total prize pool of Loteria del Nino is about half a billion euros. 40 and even more Jackpots are drawn at once.

(Tickets can be purchased online via LottoAgent) Lotería de Navidad or, as it is also called, Sorteo Extraordinario de Navidad is held since 1812 on the Christmas Eve. Within two centuries, year by year spectacular drawings of the National Lottery delight the fans. The lottery has never canceled a single draw — even the Spanish Civil War wasn’t able to break with tradition.

Loteria de Navidad drawings take place on December 22. The total prize pool of the lottery reaches more than two billion euros. Number of Jackpots in a single draw are 160 and above. Two lottery machines are used to hold the draw. The first contains 100,000 wooden balls, the numbers from 00000 to 99999 on each of them; also nearly 2,000 wooden balls with winning amounts on them are placed in the second one.

The balls are extracted simultaneously from the two machines: the first ball indicates the unique winning number, the second one — the winning amount which matches the extracted number. Winning numbers are sung out by the students of the Spanish  San Ildefonso school. The beautiful drawings of Loteria de Navidad are also broadcast on TV.