EuroJackpot is one of the lotteries that are played not across states but countries. There are more than a dozen nations taking part in this lottery making it the one with one of the most diversified players. Croatia, Slovenia, Iceland, Germany, Finland, Lithuania, Norway, Denmark and Spain are only few of the countries that play this lottery. The good thing about EuroJackpot is that you have more chances of winning some prize with this lottery compared to other lotteries. Of course, the high frequency of winning keeps the jackpot a little low when compared to the USA Powerball or Europe Euromillions but it is still huge enough to change your life completely and tomorrow the jackpot is at €90,000,000!

The start of the jackpot in EuroJackpot starts from 10,000,000 Euros and then gets bigger as it continues to roll over. While rollover does not sound good to some players because no one wins the jackpot, it is good for them in a way that it takes the total amount of the jackpot even higher. That’s what’s going to happen after the last drawing that took place on had no jackpot winners. The prize money will increase now and the upcoming winner is definitely going to win big in EuroJackpot with a first prize of at least €90,000,000. 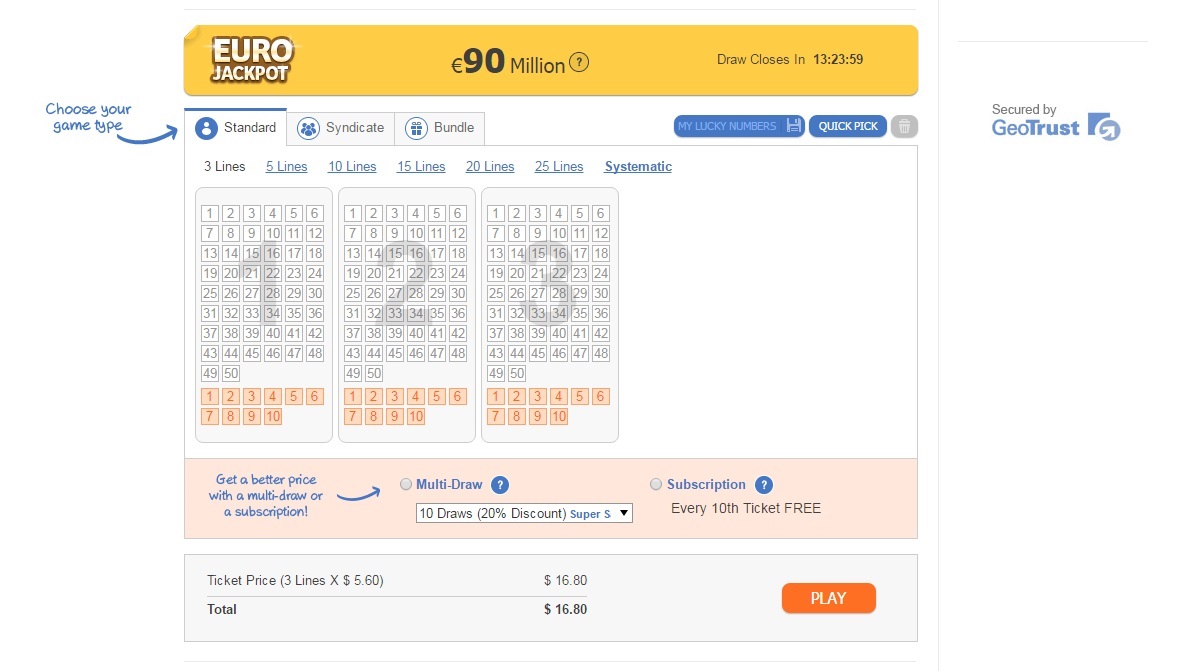 A huge win of the EuroJackpot took place on July 24, 2015. The prize money on this drawing day for the Euro Jackpot was 46 million euros. This jackpot was so huge because it had been rolling over for weeks when it was won. The jackpot before this was won on June 05, 2015. However, this jackpot was not as big as the latest jackpot. It was 23 million euros. After this win the jackpot started to roll over and the prize money started to get big for the lucky winner from one of the many nations in the lottery.

The 46 million euros were won on July 24, 2015 and this lucky winner had the lucky numbers 6-12-15-20-30 and two euro numbers 3 and 6. It was draw number 30 for the year and definitely was a special moment, not only for the winner of the jackpot but also the ones who won the second prizes. The second prize was nothing small at 730,000 that was won by two players. The third prize was won by 9 people, 4 prize by 76 people and 5th prize was won by 852 people who were able to bank 181 euros each.

The lucky winner of the huge jackpot from this draw was from Finland and he must be going through the life changing experience right now. The more interesting news is that the EuroJackpot has started to become really big once again. It is because the draws that took place in the past weeks did not produce any jackpot winner. There were 4 winners for the second and third prize each but no one could take the jackpot home for a while now.

The countdown has begun for everyone who has a ticket or is thinking of buying one to get a grab at the €90,000,000 first prize!