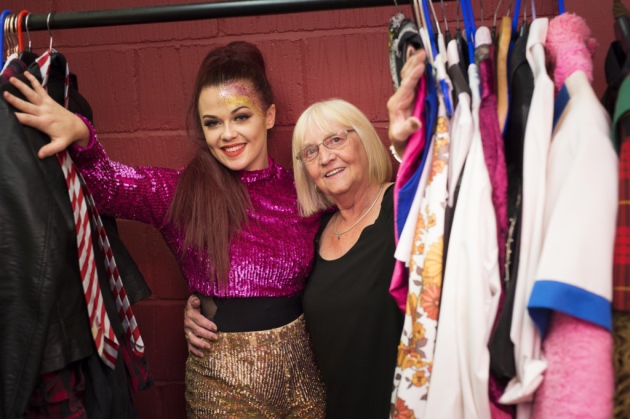 Jean Swatman, 67 and from Lowestoft, won £2 million pounds in a draw in 2013. Some of these winnings have been used to help her grandaughter Lauren Utting, 21, to go to drama school. Now Lauren, who has dreamt of becoming a professional singer and dancer since she was young, has finished at drama school she is celebrating the end of her first season as a entertainer at a popular holidaymaker on the south coast.

Lauren, a former student at Lowestoft High, said, “Despite long hours, six days a week, I really am living the dream. From that first day at Jumping Jax right through to my years with Venue of Performing Arts I only ever wanted to be a performer. I was determined to reach this position and I can’t thank nanny enough for all the support she has given me along the way, both financially but also emotionally.” Jean is equally delighted with the progress that Lauren has made thanks to her help.

“I’ve loved being in a position to do that but something that brings me, and the rest of the family, so much joy has been helping Lauren realise her dreams by putting her through drama school,” said Jean, “Without the win the whole family would have clubbed together to help but there’s no doubt Lauren would still have graduated with a huge debt to pay off.” Jean had previously worked in the bakery at supermarket Morrisons, where she filled, fried and sugared hundreds of doughnuts a day. Her winnings have already helped a number of her friends and family to whom she has given cars, holidays and houses.

She has also helped causes in her local community. Jean said; “Winning the lottery has given me so much freedom. Whether it’s jumping on a plane whenever I fancy to visit my son and his family in Vietnam, heading down to the South coast to watch Lauren perform, or helping out when I hear of a cause I think deserves a boost. “For instance, when one of my grandson’s football team was struggling to raise cash for a new kit I was able to help out. In the past I would still have made a donation but it might have only covered one pair of shorts, thanks to the Lotto win it now means the full strip for all the team!