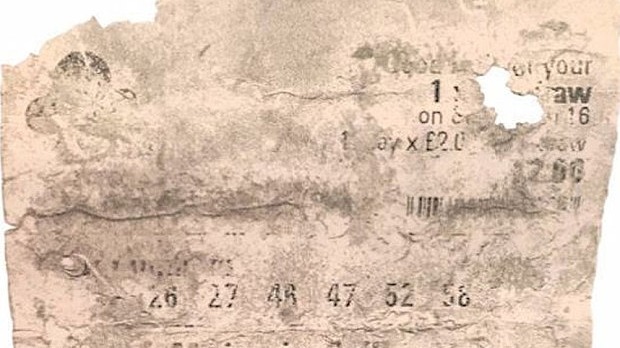 This is a picture of the ticket that Susanne Hint came forward with, saying that the ticket went through the washing machine in a pair of jeans. It has been said that she has claimed it to be the winning ticket of the £33 UK National lottery prize, of which a winning ticket is known to have been sold. Only one of the ticket holders has been verified by now and received half of the £66 million prize.

Susanne hint has apparently been ruled out as the winner because the CCTV footage of the winner that actually did buy the winning ticket does not show her ever buying a ticket in the actual store where it was bought. Only 5 people know at what date, time and place the exact ticket was bought and are still waiting for the actual ticket holder to come forward within 180 days of the draw, by Camelot lottery rules.

The winning ticket with the numbers 26, 27, 46, 47, 52 and 58 – was bought by someone else, not by Susanne Hint, and apparently Susanne had bought her ticket a day after the draw and there are accusations that she has tried to fake lottery scratcher wins in the past after claiming that the ticket had been “dropped in a puddle”. It has also been verified by officials that she is currently awaiting trial of theft charges in a theft case.

Although Susanne Hint’s lawyer is sure that she is telling the truth, Camelot officials have rules her out and she will not be winning the prize. Hint still insists that she had bought a ticket and put it through the washing machine, later to find it with the winning numbers and bar-code and date on the ticket had become obscured. These claims are under scrutiny now, with officials finding out the she has a past ridden with criminal activity, failure to pay fines and is known to have been lying on dating sites claiming that she is a nurse when in fact she is not registered as a nurse.

This is the largest jackpot prize record in the history of the UK National Lottery game, the still unknown winner has a claim on half of the £66 million prize. A winning ticket has already been claimed. National Lottery rules state that anyone with a winning ticket has 180 days to come forward and claim a prize. Anyone without a ticket has 30 days to make a claim by writing a letter to Camelot stating exactly where and when their ticket was bought.

In this case (of Susanne Hint) the claim is being dealt with by officials as any missing ticket case and Susanne Hint apparently could not come up with the needed information of stating the true date, time and place of where the true winning ticket was really purchased. Meaning that her claim apparently was a false one. It is still unknown whether Camelot may be pressing charges against her for making a false claim or not or whether her claim may be looked into further by Camelot officials.

A Camelot spokeswoman stated that they may look into the CCTV footage again if they have the need to do so. A security expert has said that CCTV is important in these types of cases for establishing who exactly bought their ticket, when and where and that mobile phone data could also be a determination factor pointing to where a person was at the time a ticket was bought. Camelot says that all of the past National Lottery winners that went public with their win, are known to have been owning the physical ticket.